You are using an outdated browser. Please upgrade your browser to improve your experience and security.
Maurizio Cattelan
Italian artist
Media
Print
Thank you for your feedback

A self-taught artist, Cattelan began his career designing furniture but turned to sculpture and conceptual art in the early 1990s and quickly garnered a reputation for a sense of humour and a penchant for blurring the distinction between art and reality. He described himself as a “lazy” artist and told The Guardian newspaper that “I don’t do anything.” Some of his actions backed up the latter claim. In 1992, for example, he assembled a group of donors to award him a $10,000 grant that stipulated that he not exhibit any artwork for one year. At the 1993 Venice Biennale, he made a statement (and a profit) by subletting his exhibit space to a perfume company. At an exhibition in Turin, Italy, he knotted bedsheets together and hung them out a window, giving the impression that he had left the building.

In truth, however, Cattelan did plenty of creating. In 1999 he exhibited La nona ora, which depicted Pope John Paul II having just been struck by a meteorite. That same year, at a London gallery, he displayed a miniature replica of the Vietnam Veterans Memorial, located in Washington, D.C., that had engraved on it the score of every football (soccer) match lost by the English national team. His commemoration of the September 11, 2001, attacks on the World Trade Center, Frankie and Jamie (2002), showed two wax figures of New York police officers standing upside down.

Cattelan’s 2011 retrospective at New York City’s Guggenheim Museum, where the artist suspended his work from the centre of the building’s iconic rotunda, opened to mixed reviews but nonetheless confirmed his place in the contemporary art world—as did the fact that his work often commanded millions at auction. Some, however, still questioned whether Cattelan was a legitimate artist or just a con man, and that issue pervades the documentary Maurizio Cattelan: Be Right Back (2016).

Despite causing much controversy with his satiric critique of the art world and of society in general, Cattelan deftly managed—for the most part—to enthrall rather than enrage his audience and his peers. Indeed, his America sculpture, a functioning solid-gold toilet, which was installed in a restroom at the Guggenheim from 2016 to 2017, drew long lines from good-humoured visitors and caused a social media frenzy. The artwork, estimated to be worth more than $4 million, was later stolen from a restroom at Blenheim Palace in Oxfordshire, England, while on exhibition in 2019.

The Editors of Encyclopaedia Britannica This article was most recently revised and updated by Alicja Zelazko, Assistant Editor. 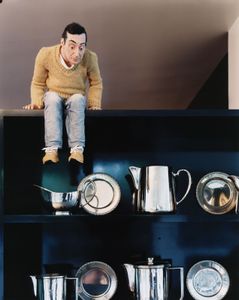